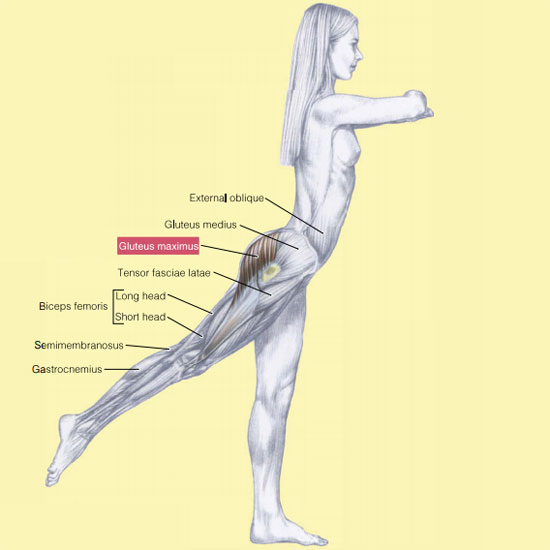 Hip extension. The hip extension belongs in the isolated, single-joint exercise category because only the hip joints are mobilized. Nevertheless, the hip extension recruits muscles in addition to the gluteus maximus: the hamstrings and the lower back.

How to Do It

Starting with both feet together, lift one leg up as far back as possible using your glutes. Hold the contracted position for one second while squeezing your buttocks together as tightly as possible. Return to the starting position and repeat. Once you have finished a set with one leg, move immediately to the other leg. To increase the range of motion, you can bring your leg forward until your thigh is about parallel with the ground and then straighten it to the back.

The easiest way to perform the hip extension is standing because the range of motion is short and gravity results in little resistance being placed on the gluteus maximus. 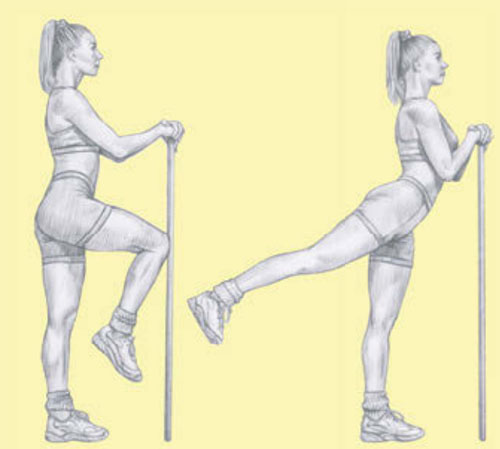 • It is the easiest exercise to perform that directly targets the glute muscles.

• It can be performed at home without much equipment.

• Once you have gained more experience in weight training, you may want to move on to more complete leg exercises such as the squat or deadlift.

! Important! Although rounding your lower back better enables you to feel your glutes working, doing so may endanger your spine.

• Using your free hand to touch the part of your glutes you want to develop enhances your brain–muscle connection. This simple maneuver enables you to feel your working muscles more, rendering the exercise more effective.

• You can raise your leg back only so far because the extension of the hip is limited by tension in the iliofemoral ligament (Bertin’s ligament). Past a certain point, your leg will not rise anymore unless you bend your torso. Instead of moving back, it begins to move laterally. When that happens, the muscular tension is transferred from the gluteus maximus to the gluteus medius.

• To really work the gluteus maximus, do not pivot your leg toward the outside too much. It is OK for the leg to move slightly toward the out-side, but do not exaggerate this abduction of the leg. 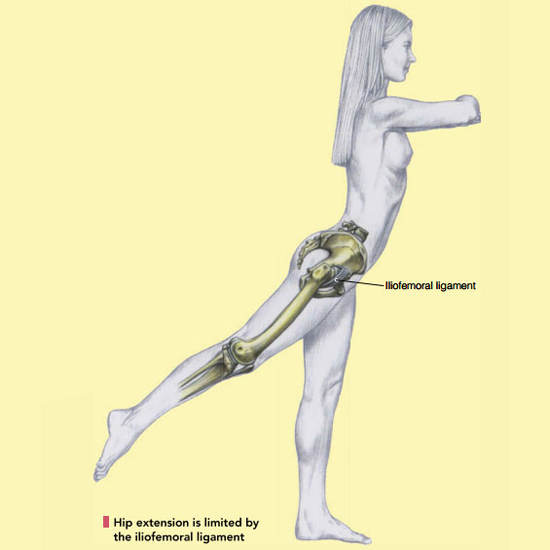 Hip extension is limited by the iliofemoral ligament.

• If you like the standing position, unless your fitness level is very low, we recommend that you not spend time performing this exercise with no resistance. You can use an elastic band, an ankle cuff weight, or an ankle cable attachment to increase the resistance. 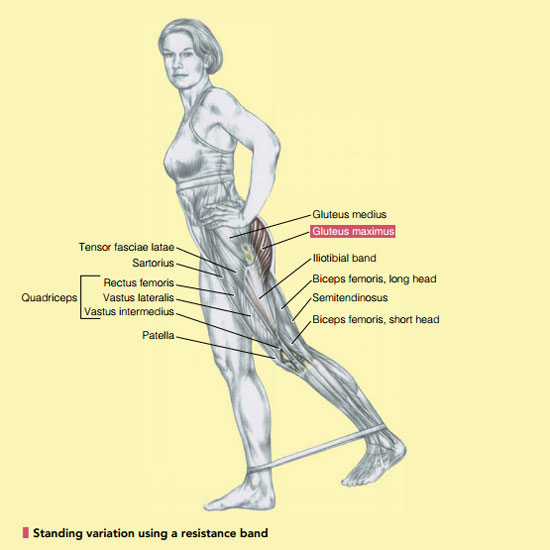 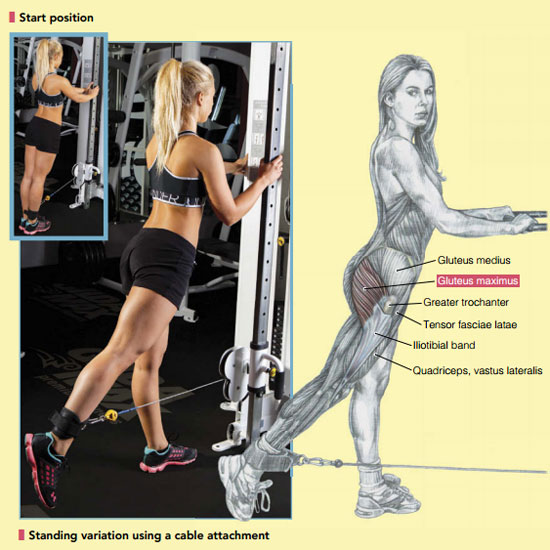 All of the hip extension variations are relatively similar. Their main differences relate only to the degree of resistance placed on the glute muscles and to the range of motion of the movement. Ankle cuffs, elastic bands, and machines render the movement more effective in terms of muscle toning by adding extra resistance, thereby increasing the difficulty of the movement.

• Some glute machines place extra resistance, either behind the knee or on the Achilles tendon. 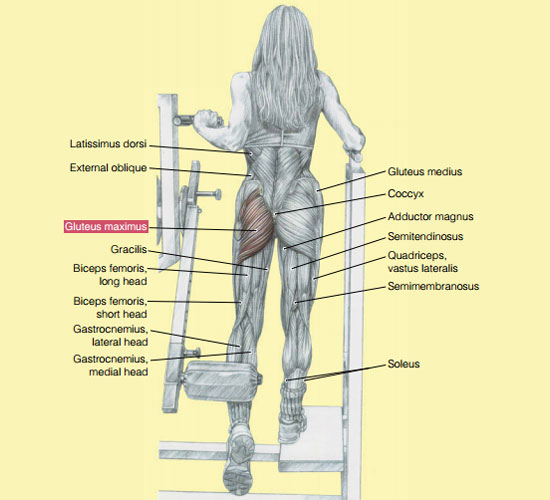 By lying on the floor, you increase the resistance but decrease the range of motion.

• Lie on your abdomen and support yourself on your forearms with a slight arch in your lower back.

• You can also perform a Superman version in which you start prone with your legs out behind you and your arms straight ahead and raise your legs and arms simultaneously. This variation also works the lower back and the backs of the shoulders. 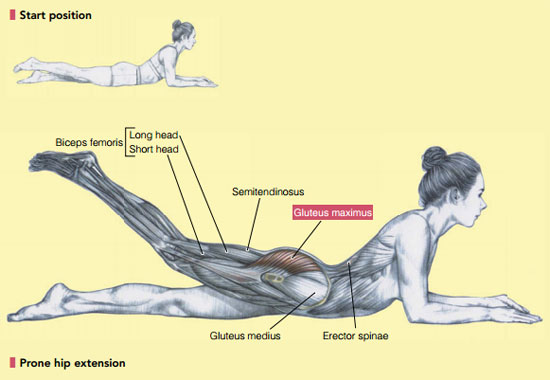 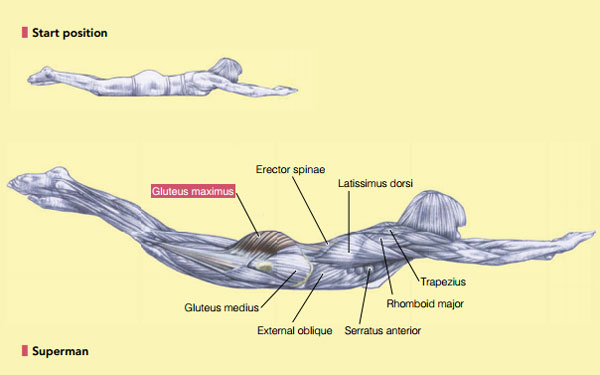 By kneeling, you increase both the resistance and the range of motion.

• When you bend the leg (often called a donkey kick variation), the exercise becomes easier. When you straighten it, it becomes harder. However, if you perform the exercise kneeling, you should bend your leg to 90 degrees so that you can bring it under your torso to increase the range of motion. Straighten the leg out again as soon as it is no longer underneath you. At that point, the knee joint comes into play.

• Using an elastic band, an ankle cuff weight, or an ankle cable attachment places extra weight on the glutes. 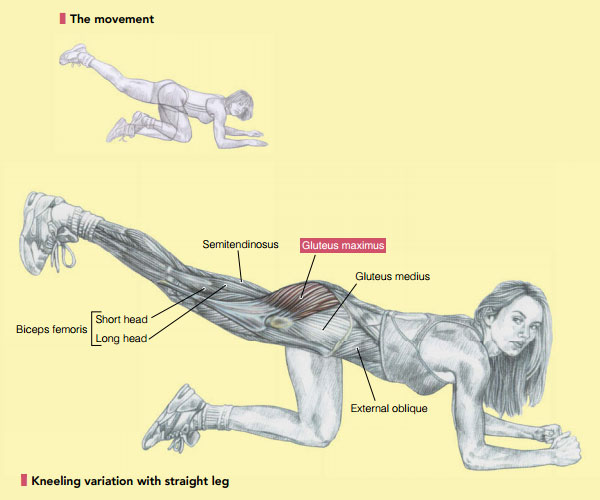 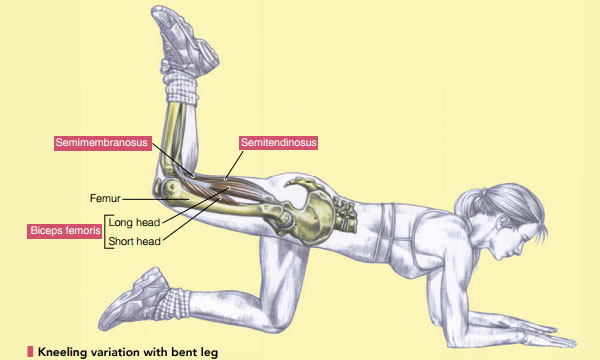 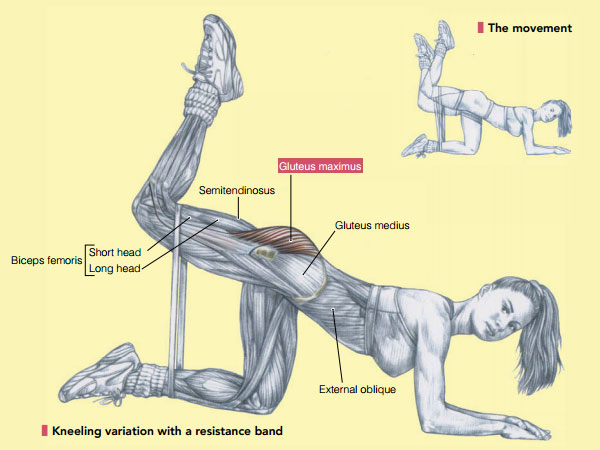 Kneeling variation with a resistance band.

• For an added challenge, positioned on your hands and knees, simultaneously lift the opposing arm and leg.

• Instead of kneeling on the floor, you can place the rested knee on a bench to further increase the range of motion of the movement and therefore its difficulty. 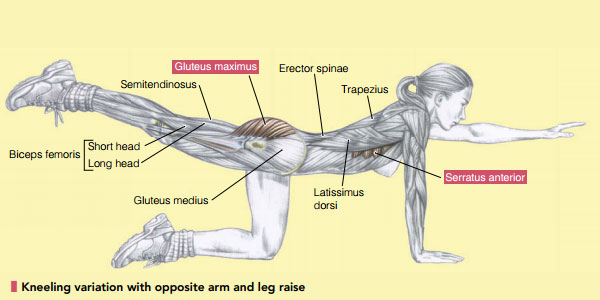 Kneeling variation with opposite arm and leg raise. 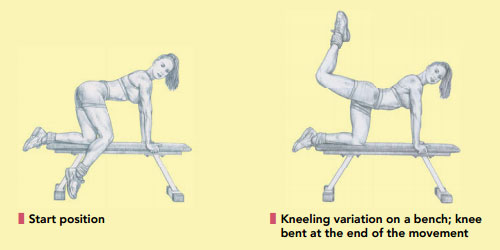 Kneeling variation on a bench; knee bent at the end of the movement. 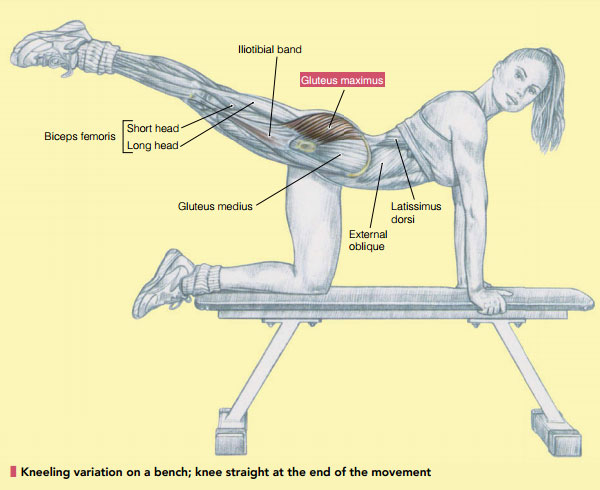 Kneeling variation on a bench; knee straight at the end of the movement.

• Machines called Butt Blasters add extra resistance on the soles of your feet to render the exercise more intense and more effective. Note that there is a difference in the movement because the knee joint is mobilized. As a result, in addition to recruiting the glutes and the hamstrings, the quadriceps also come into play. 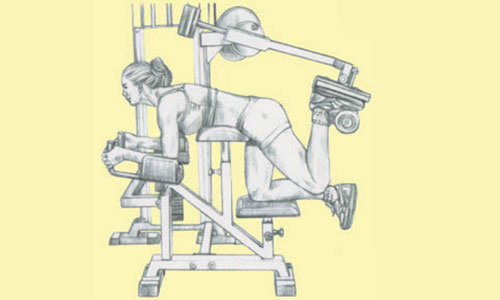 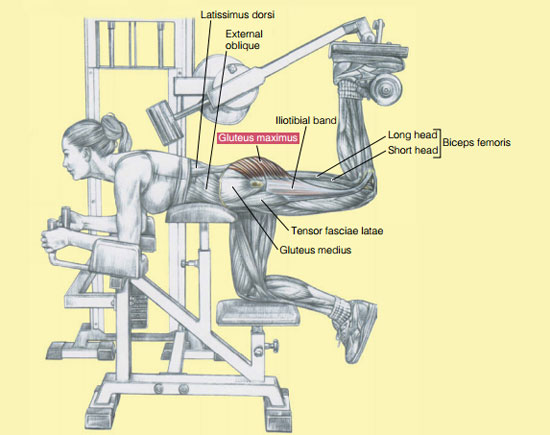 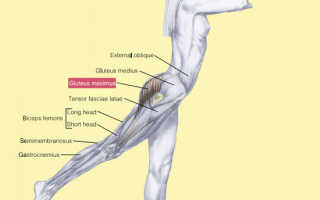 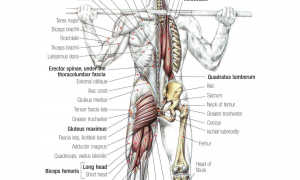